Imagine being able to retire after just a decade of work or having the option to tell your boss to… 👋👋👋 Well, there are Australians who are doing just that and retiring in their 30s.

We won’t fool you. This requires a very special type of person. A person who can save and grow $$$ seven figures in 10 years through extreme frugality (Spoiler: I am not this person).

A quick browse of the Financial Independence Australia sub-Reddit reveals these traits:

Suffice to say, even if FIRE went mainstream (it won’t, you’re not going to find a pack of financially savvy 30yos sinking pints at your local beach).

Let’s hear from them.

Pat the Shuffler – mid-way to FIRE

Meet Pat The Shuffler from Sydney. He’s only 30, but is aiming to retire with over $1 million in the bank by the time he’s 35.

Here’s his table to prove it..

Pat’s philosophy is to be frugal, without losing the fun in life.

“How I spent the weekend: hiking through the wilderness, setting up camp overnight and admiring the stars. Living the good life doesn’t have to cost a lot.”

What we can learn from Pat is his plan. He has a solid investment strategy and he sticks to it. When he gets a windfall or a pay rise, he doesn’t lift his spending to match, instead he just saves even harder.

Along with financial independence, Travers has setting up multiple passive income streams that are the path to her early retirement.

Plus, she’s even more savvy; the work she chooses to do feeds the lifestyle she really wants.

“For some people, a large house, new car and regular holidays are their top priorities,” Ms Travers said.

“For my daughters and I, living life, having experiences and choices is important. As such, we don’t feel like we sacrifice a lot.

“That said, we live in an area where the homes are over $1 million, travel a lot and get to do a lot of life experiences because of my work and chosen lifestyle.” 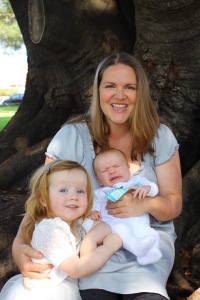 Lacey had saved hard from her teens. An early tip from her mum saw her purchase her first home instead of blowing the cash on a fast car. A sickness saw her ditch her stressful, high-flying career in mining for a life she could live on her own terms.

She bought property early, and continued to invest in both property in shares before reaching FIRE at 31.

In the last years of her 20s Lacey balanced consulting work with “mini-retirements”.

“We made end-of-life retirement up. It’s not compulsory. In five years, I took five mini-retirements totalling 22 months off. In between those mini-retirements, I did contract work and tinkered with my financial education idea, which later became my business, Money School.”

Lacey shares her top three tips on how she FIREd: